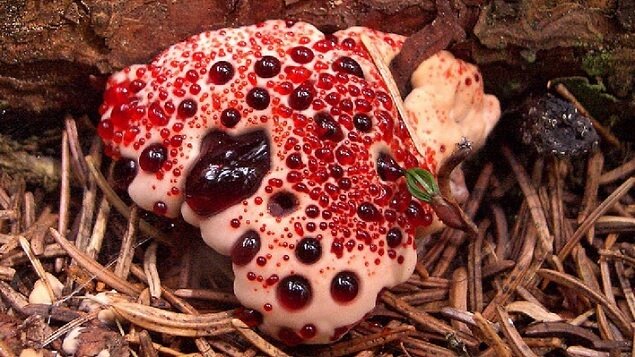 It’s the time of year for spooks and goblins, but sometimes nature provides all the scare factor we need! Check out these 13 truly horrifying plants, but you might want to bring a buddy…

If you’re looking for some scary Halloween pictures to share, you can’t go wrong with these weird, wild, incredible plants! These freaky specimens run the gamut from simply scary looking, to truly dangerous or even deadly.

While you probably wouldn’t want to plant these in your garden, they sure are fun to look at, and come to think of it, they would be fun to scare the neighbor kids with…. 🙂

Check out the garden of horrors below:

The Octopus Stinkhorn is a fungus which grows near wood debris. It looks like bloody mutant octopus. It usually only has four to eight “tentacles” — although some may have more. Its “tentacles” have a pinkish-red interior with a sticky, dark-colored substance called gleba, which contains spores. Although it’s now found in other parts of the world, its origins are traced to Australia. It also goes by the nickname, “Devil’s Fingers.” By the way, it smells like rotting flesh.

The Rafflesia is leafless and rootless parasitic flower that boasts of the largest blooms. It feeds off other plants. It usually grows to a diameter of three feet and could weigh as much as 24 pounds. It’s usually found in forests in southeast Asia. It looks like an alien life form just waiting to swallow up small animals. Its stinky smell attracts carrion flies.

The Porcupine Tomato looks like it could hurt people…and it could. Native to Madagascar and the islands of the western Indian Ocean, it’s a poisonous plant that’s adorned with thorns.

The Doll’s Eyes clearly refer to the berries of this plant, which is indigenous to North America. The berries and all the other parts of the plant are poisonous to humans. They have been known to cause gastrointestinal inflammation or, worse, cardiac arrest.

The Bleeding Tooth Fungus lives up to its name, as it looks like a bunch of bloody teeth. The “teeth” are actually just there to produce the red spores, which give the fungus its interesting look. It’s common in the forests of North America and Europe. It’s not poisonous but it’s known to be extremely bitter.

The Black Bat Flower lives up to its name. It can grow up to a foot in diameter and its “whiskers” can grow up to 28 inches. They’re common in Asia. They also look like they can come alive and attack people.