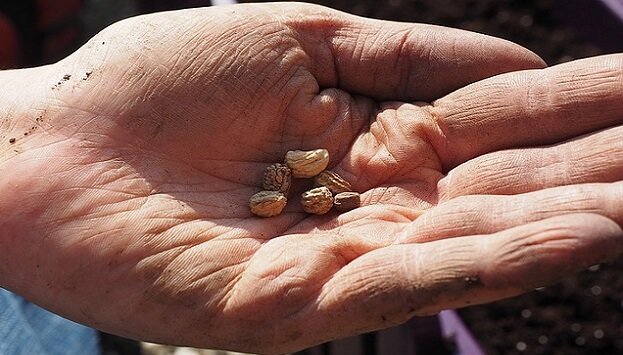 When planning your planting this spring, you will be faced with the choice between hybrid and heirloom varieties. Here are 3 good reasons for choosing heirloom seeds.

It’s a question every modern gardener faces at some point: should you choose an heirloom variety, or a hybrid? Hybrid varieties are usually created to solve a specific problem, or add a special benefit to a certain crop. For example, sweeter ears of corn, or tomato plants that are resistant to blight.

These sound like good things, right? It’s true, they can be, and hybrid varieties have provided many benefits to gardeners for many years.

However, hybrids also have some drawbacks. For example, you can’t save your own seeds from hybrid plants from one year to the next – at least, not with reliable results. Another big reason is species diversity.

Check out this article for 3 reasons why heirloom seeds should be at the top of your garden shopping list this year:

You may be shocked to learn that 90%of the vegetable seed varieties in existence 100 years ago are now extinct!

The loss of seed diversity may seem like a shame, but how does it really affect you? In truth, it’s actually a grave danger to our survival as a species, as described in the fascinating documentary, Open Sesame: The Story of Seeds.

The good news is, there IS something you can do about it: Plant heirloom or open-pollinated seeds!

Here Are 3 Reasons Why You Should Grow Heirloom Seeds This Year:

1. Lack of Plant Diversity Could Lead to Our Extinction

We’re starting off with one of the scariest reasons why it is so important to preserve multiple varieties of plant species. And while it may sound a bit far-fetched at first, the truth is, the fewer varieties of seeds that remain, the more dependent we become on their survival for our survival. A widespread disease affecting a certain plant variety could very well wipe out a major food source….

Many say that keeping genetic diversity in our food supply is more important than taking steps to curb climate change – yet it is discussed far less frequently. You can help make a difference by sharing this article with friends, encouraging them to watch the documentary, and of course, growing and saving your own seeds.

2. Preserving Seed Diversity Is Up to YOU!

With the Monsanto’s of the world breathing down the necks of large-scale farmers and limiting their options as to what seeds they can plant, it is increasingly left in the hands of the small gardener and independent organic farmer to save and preserve heirloom varieties of seeds for future generations.

Unlike inorganic items like silver and gold, however, you can’t just lock seeds away in a vault forever. To preserve seeds for future generations, we have to grow them – and keep growing them!

Doesn’t it feel good to know that you actually have control over this aspect of your food supply? YOU can make a real difference to our future – just by planting, growing, and saving some seeds every year. Not only that, but it’s really fun and rewarding! Which brings us to…

3. Our Seeds Tell Our Stories

Many people nowadays may not remember the time when seeds were basically a part of the family, but they were. In fact, seeds were once traded as an extremely valuable commodity, and they were one of the most valuable possessions a family could own. There were even fables about them (Jack & The Beanstalk being probably the most famous). Seeds give the ability to create life, to make a living, to feed a family.
…………………………………………..

…Seeds are linked to us in ways that many of us have forgotten. And growing them provides us with a sense of connection and purpose that goes much deeper than just putting food on the table….

Interesting, isn’t it? Check out the full article at New Holistic Living….
Share This!