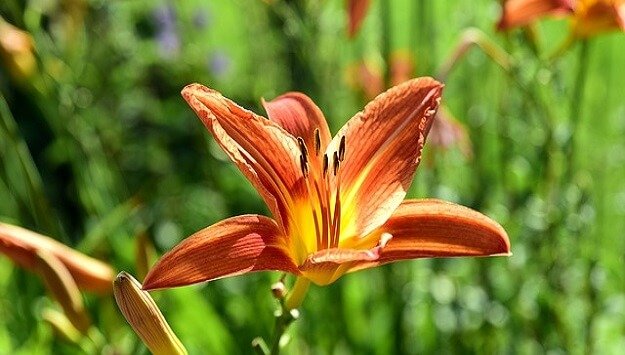 Spruce up your summer salads with some fresh edible flowers from your garden! Here are a few tasty options to try…

Many gardeners love to decorate their gardens with beautiful flowers, many of which are not only attractive but also attract beneficial predator insects and pollinators. However, you may not realize just how many of these lovely flowers are actually edible.

Quite a few flowers are not only beautiful but also delicious! Some have a delicate floral flavor (such as rose petals), others have a peppery “zing” (like my favorite – nasturtium!) and still others taste similar to the leaves of the plant (think chive blossoms), but with a more decorative aspect. Most edible flowers are best eaten raw, as an addition to salads, for example, but others, such as squash blossoms, may be stuffed and cooked before eating.

(A note of caution: If you want to try snacking on flowers, first make sure you have correctly identified them – especially if they are growing wild. If in doubt, here is a list of poisonous flowers to avoid at all costs.)

Below are 5 tasty and safe edible flowers to try in your garden – and in the kitchen.

In the Kitchen: These cheery flowers have a fairly neutral, nondescript flavor and are used to brighten-up both salads and sweets. Pastry chefs sometimes use Calendulas to make floral designs on cheesecakes and other goodies. Because the golden-orange petals hold their hue when cooked, they’re sometimes used as a saffron substitute as well.

In the Garden: Calendula is easy to grow from seed, and often reseeds itself in the garden each year without any effort on the part of the gardener. Needs full sun and regular water.

In the Kitchen: Most types of lilies are mildly toxic when consumed, but not daylilies. (Though botanically speaking, daylilies are not a true lily.) Daylily blossoms are meatier than most flower petals, with a succulent texture and a mildly sweet taste, similar to romaine lettuce. Chop them up and add them to salads, but be sure to sample the flavor first, as some daylily varieties taste better than others. Also try stuffing them with herbed cheese or dipping the unopened flower buds in batter and frying them up as an hors d’oeuvre.

In the Garden: Daylilies are generally sold as a potted plant and are easy to grow in sun or part sun, as long as you provide ample moisture. In rich soil, they spread to form extensive colonies, so beware where you plant them.

In the Kitchen: Borage flowers have a mild, cucumber-esque flavor and are used to jazz-up salads, drinks, and savory dishes. The plant’s electric-blue hue is a great compliment to calendula’s golden tones, making for a photo-worthy plating.

In the Garden: Borage is easily grown from seed, and typically reseeds itself in the garden year after year. Drought tolerant.

In the Kitchen: Hibiscus flowers have a cranberry-like flavor with tropical notes. Though they’re most often made into iced tea or infused into other cold drinks, chopped hibiscus flowers add a tangy spunk to salads and desserts.

In the Garden: There are numerous edible species of hibiscus, but it is the Jamaican species Hibiscus sabdariffa that is most known for its flavor. Hibiscus is typically purchased as a potted plant. Needs full sun and ample irrigation.

In the Kitchen: Nasturtium flowers have a peppery zest similar to watercress, to which the plant is closely related. They are primarily used in salads and as a garnish for hors d’oeuvres, though the tubular flowers are large and sturdy enough to stuff with cheese or tapenade.

In the Garden: Nasturtium is easily grown from seed in partial shade or full sun, and often reseed themselves in the garden. Thrives in rich soil with regular irrigation, but doesn’t love hot weather.