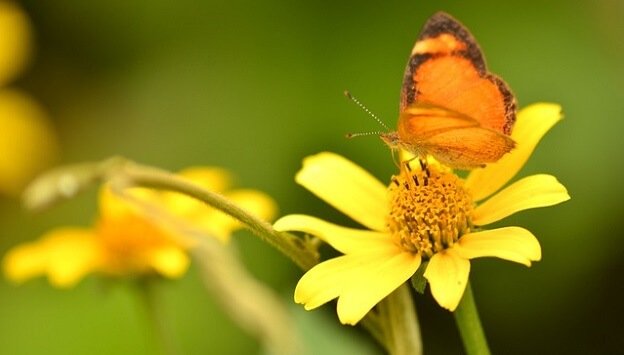 Bees may get the most attention, but they’re not the only pollinators on the block! Here are 5 more important garden pollinators & how to attract them to your garden…

Bees have gotten a lot of press lately – as well they should. Bees (not just honeybees, but all types of wild bees) are incredibly important to our food supply. After all, without them and other pollinators, we would have virtually no food to eat!

But with all the fuss about colony collapse disorder, the effects of pesticides on bees, and other bee-related stories, we sometimes forget that there are lots of other pollinators out there besides bees.

This article from Modern Farmer gives a shout out to some of the often-neglected pollinators that haven’t had so much media exposure.

Check out these 5 valuable garden pollinators – plus some tips on how to attract these beneficial critters to your garden:

That’s right – bats pollinate more than 500 species of plants worldwide, including many tropical fruits… They also pollinate agave plants in Mexico, the source of an alternative sweetener (agave nectar) and booze (tequila)…

To attract bats, install a bat house under your eaves or in a nearby grove of trees. You can also plant some of their favorite flowers: evening primrose, nicotiana, heliotrope, four o’clocks, moonflower, night-blooming jessamine, and honeysuckle.

Beetles aren’t the most cute and cuddly creatures in the insect kingdom, but they play a major role in pollination. In fact, beetles were pollinating plants millions of years before bees even evolved… There are hundreds of types of beetles, big and small, so almost any type of flower is fair game.

You don’t need to do much to attract beetles, as most live in the duff that naturally accumulates on top of the soil or on decaying bits of wood. So as long as you don’t maintain a scorched earth policy in your yard, or spray insecticides, beetles should roam aplenty.

Butterflies like large flower clusters that form a landing pad. To attract them, plant species such as yarrow, milkweed, coneflower, butterfly bush, alyssum, and calendula. They also like patches of wet earth from which to glean moisture and minerals.

Hummingbirds are well known nectar-hounds, pollinating flowers as they dip their slender beaks for a drink. But in other reaches of the globe, many other birds provide this ecological service: sun birds and spider hunters (Africa and Asia); honeyeaters and lorikeets (Australia); flowerpeckers (Asia and Australia); honeycreepers (Central and South America); and sugarbirds (Africa). The planet’s 2,000 or so bird pollinators mainly visit wildflowers, though in the tropics they help to pollinate food crops such as bananas, papaya, and nutmeg.

Bees get all the credit, but spend time in any flower patch and you’ll quickly notice a plethora of other flying insects busily scavenging amid the petals. Flies generally favor wildflowers in moist, shady places, though certain species of hoverflies are major pollinators of orchards across North America. Moths compete with bats at night for large fragrant flowers, including the tropical crops like cashew and papaya. Wasps (mainly small, stingless ones) help pollinate a variety of crops… Midges, tiny gnats the size of a pinhead, are the exclusive pollinators of Theobroma cacao, the tree that produces chocolate. Even mosquitoes and ants are known to visit flowers, passing grains of pollen from one to the other along the way.

As with beetles, attracting these additional insects to your garden is mainly about what you don’t do—namely, spraying insecticides.