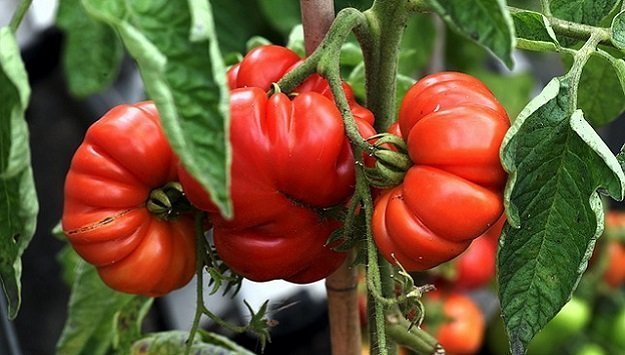 Tomatoes are generally a fairly easy-to-grow crop, but growing healthy tomatoes can be trickier if you live in a cool or damp climate. In case you haven’t noticed, tomatoes love hot, dry weather! In cooler temperatures, they grow more slowly and don’t produce as much fruit. And while they do enjoy a lot of water to drink, when their foliage gets wet often, it can make them much more susceptible to blight.

Here in central Ohio, tomatoes tend to grow very well in our warm summers, but ours usually do have quite a bit of blight due to all the rain we’ve had the past few summers. (Usually this doesn’t impact our crop too badly, as it doesn’t get bad until later in the season when we’ve just about had enough of tomatoes anyway. However, some years are worse than others.)

The best way to grow healthy, disease-free tomatoes is to plan ahead and follow a few simple planting tips. However, even if your tomato plants are already in the ground, you can still take steps to improve their health and ensure a more productive tomato crop this year.

The first thing that you need to know about growing healthy tomatoes is where you’ll be planting them and what the soil is like. If your tomato plants are already in the ground, you’re probably not going to want to move them. But ideally you should plant tomatoes where they will get full sun for at least six to eight or more hours each day.

If you’re dealing with an area that gets a lot of shade and you need to plant tomatoes in a somewhat shaded spot, pick the area on your property that gets the most sun in the afternoon and later in the day, because usually that’s more of an intense sunlight than the sunlight we get first thing in the morning.

As far as soil goes, there are a lot of nutrients in the soil that will help your tomatoes too, not only to be robust and productive, but also to cut back on the diseases they’re susceptible to.

Your best bet is to get a soil test done so that you know the Ph level and all of the exact macronutrient levels of your soil. That way you’ll know if you need to amend for them or not. Soil tests are pretty inexpensive. A lot of local county extension offices will even perform them for free.

Step 2: Mix in some compost

No matter what your soil is like, you can’t really go wrong adding some compost to your soil. So if you’ve got some good organic compost, work some of that into the soil at the bottom of the hole at planting time.

Again, if you’ve already planted, then you can do what we call a top dressing, which simply means adding compost on top of the soil around the drip line of the plant, which is the outer edge of the leaves of the plant where the water drips off and hits the soil. Work in your top dressing wherever water is hitting the soil around the plant because it’s going to help carry all the nutrients to the root.

One of the most common problems people experience with growing healthy tomatoes is blossom end rot. So as the tomato plant starts to mature, the fruit will start to rot from the flower (blossom) end of the tomatoes. This is also a common problem with squash plants like zucchini and winter squash. The end will turn soft and brown and Mushy, and then eventually black. That’s called blossom and rot. Usually this is a direct result of not having enough calcium.

Again, if you have a soil test done it, it will let you know if you have enough calcium present so that you’ll know if this a watering issue or it’s an actual lack of this calcium. So do a soil test first if at all possible, and add calcium at planting time or as a top dressing later.

The easiest, cheapest and most organic way to add calcium is to add crushed eggshells to the soil. Save your eggshells. Let them dry and then use an old coffee grinder or something to grind them up fine.

You’re basically going to pulse them into a fairly fine powder, because the smaller each particle is, the quicker it will break down and release nutrients into the soil. That’s going to help naturally add calcium to the soil without adjusting the Ph level. Typically I add about two tablespoons to 1/4 cup of crushed eggshells to each planting hole.

Another organic way to add calcium to your soil is by adding lime. However, using lime affects the overall Ph level of the soil, so I don’t recommend that it unless you know what your Ph level is. If your Ph level is good, then I wouldn’t use lime. I would use the crushed up eggshells.

Step 4: Water tomato plants deep but not too often

Back on the topic of blossom end rot, the calcium levels in your soil may be just fine and you can still experience blossom end rot if you’re not watering correctly.

Tomatoes have a very large root system, and we want that root system to be really developed because that’s going to help make the plant healthy and vigorous and produce a larger harvest. So ideally you want to water them really deep just a couple of times of week because as the top of the soil starts to dry out, that forces the roots to dig down and to go deeper and to become bigger and stronger and more robust.

When you just do a little bit of watering each day you’re really just getting the top layer of the soil. Then again, if you’re watering deep but too often, that can cause the plants roots to stay wet. Both of these scenarios can cause problems like blossom end rot. So ideally, give your tomato plants about two inches of water, one to two times per week.

Ideally you want to wait until the top of the soil dries out before watering again. But you don’t want to let it dry out too much because if your plant starts to wilt then that’s going to stress it out too. So you really have to find the Goldilocks zone that’s not too wet, not too dry but just right.

Step 5: Prevent the leaves from getting wet

Speaking of watering with tomatoes, the other big disease that tomatoes are really susceptible to is blight. Blight is a fungus, and it usually comes from overhead watering or having soil splashing up on the tomato foliage. It’s really hard to get rid of once it’s infected the plant, and it stays in the soil for a number of years, which can affect any plant in the night shade family, including tomatoes, potatoes, peppers and eggplants. So if you get blight, you don’t want to be planting any of those plants in the same soil for quite a long time.

Crop rotation is even more important when you’re dealing with tomatoes and things in the nightshade family simply to avoid sharing similar diseases like this.

As far as watering, try to water at the base of the plants to prevent the leaves from getting wet as this will help to prevent blight from infecting your plants. If you’re using an automatic watering system, avoid overhead sprinklers and instead opt for soaker hoses.

If you live in an area that has a lot of rain like we typically do, you might consider covering your tomatoes to keep them dry.

We made our own high tunnel out of an old metal car port kit, like the ones you might cover a vehicle or a boat with in your driveway. That’s where I plant all of our tomatoes and our peppers so that they’re protected from the rain. Since covering them six or seven years ago, I haven’t had a problem with blight.

For a full tutorial on how we set up our high tunnel, you can go and check out the video on Youtube. It’s an easy DIY project. We love it. It’s lasted us six plus years and she’s still going strong even after some 70 plus mile per hour winds.

Even if you have a large eve or an overhang on your house, you can put your tomatoes underneath that. You can also use a smaller hoop house out in the garden. Just be sure to cover it with greenhouse plastic or something that allows all of the sunlight to come through, because tomatoes do need full sun.

Get more tips for growing healthy tomatoes at MelissaKNorris.com…