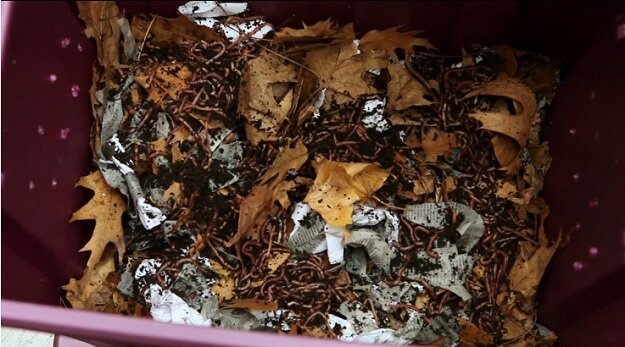 If you’re a sustainable gardener, you probably have a compost pile – or maybe more than one. But did you know you can also make great compost indoors in the winter months? Here’s how.

Those gardening in cooler climates know that composting slows down a lot during the winter months. While you can still add to your compost pile, things just don’t break down quite as fast.

If you want to get faster results with your composting, why not try composting indoors? The way to do this is by using earthworms. (This is called worm composting, or vermiposting, depending on who you ask.)

This helpful article shares 6 simple steps to getting started with your own worm compost, so you can have plenty of lovely, finished compost to start your garden in the spring!

Common kitchen waste—including papery onion and garlic skins, carrot tops, and coffee grounds—can be composted year-round in an indoor worm bin. A worm bin fits discreetly into a closet, garage, or pantry, making composting quick and convenient, especially for small-space gardeners and apartment-dwellers. Turning food scraps into compost, instead of sending them down the garbage disposal or to the curb, reduces the amount of organic material that ends up in local wastewater treatment plants and landfills.

The process is known as vermicomposting, and it requires a specific type of worm. Unlike regular garden earthworms, which burrow in the soil, red wiggler worms (Eisenia foetida) act as nature’s recyclers, living on or near the surface, where they help decompose organic matter. This habit makes them ideal candidates for living in an enclosed worm bin.

…As they eat, worms produce castings—a crumbly, granular organic matter that is rich in nutrients.

Worm compost, or vermicompost, is a mix of castings and decomposed organic matter. Vermicompost contains a greater diversity of beneficial microbes than traditional compost, which may be why it is linked with increasing plants’ resistance to fungal diseases. The nutrients in worm compost are also more available to plants—a quality that researchers think helps plants grow faster and stronger and resist attacks from aphids, mealybugs, and spider mites.

Ready-made worm bins are available, but it takes less than an hour to build a bin using common household supplies. Here’s how to do it:

Get the 6 steps at RodalesOrganicLife.com…