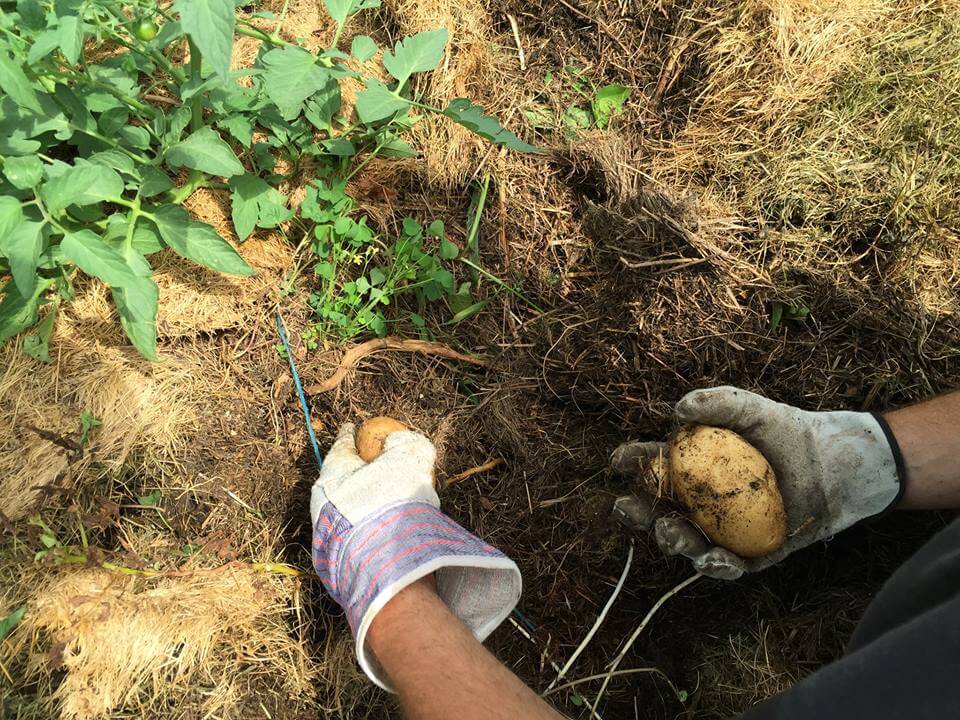 Hay bale gardening can be a great method for those with limited garden space, and potatoes do especially well in them. Check out this amazing hay bale potato harvest!

If you’ve never heard of straw bale or hay bale gardening, it involved planting your garden in bales of hay or straw, usually with some sort of compost or manure added on top.

It’s a super easy method of gardening (although it does have its drawbacks), and it’s great for people without a lot of garden space, with tainted soil, or for those with disabilities, as it doesn’t require any digging, and your garden will be easier to access.

Many different types of vegetables can be successfully grown in hay bales. Potatoes are just one that does really well using this method – and it’s just about the easiest potato harvest you’ll ever have!

Check out this blog post to see a really cool example of the kind of potato harvest you could get from a hay bale garden!

We only planted 3 bales of potatoes this year – two were planted with various varieties from our CSA, and one was a late planting of Yukon Golds, which went in much later than it should have, but it doesn’t seem to have hurt the harvest too much as far as I can tell.

The plants looked absolutely beautiful all season, after a spotty start, with late frost taking some of the new plants, and a few that never came up at all. The ones that came through grew quickly and vigorously. The only pests that bothered them this year were the flea beetles, and they didn’t seem too troubled by them frankly.

We finally harvested them last weekend, and unlike potatoes grown in dirt, they were very clean overall, and relatively easy to find. We also didn’t have to worry about cutting them or stabbing them with a fork or shovel, and pawing through the decomposing hay was quite easy compared to digging them out of the ground.

Overall I would say our first try at growing potatoes in hay bales was quite successful. We planted no more than 2lbs of seed potatoes to start with, and harvested 26lbs, so overall I would say it was quite a satisfactory ROI. We would definitely do this again, and next year would like to expand to 5 or 6 bales.

Another benefit to growing in hay bales is the load of beautiful compost that’s left behind for next year! The bales are largely decomposed by now, and their tasty remains will go on the compost pile to finish up for next summer’s garden. Although we bought a truck load of compost to start off our garden this spring, I don’t think we will need to do so in the future, especially if we continue gardening in hay bales!
………………………………………………..