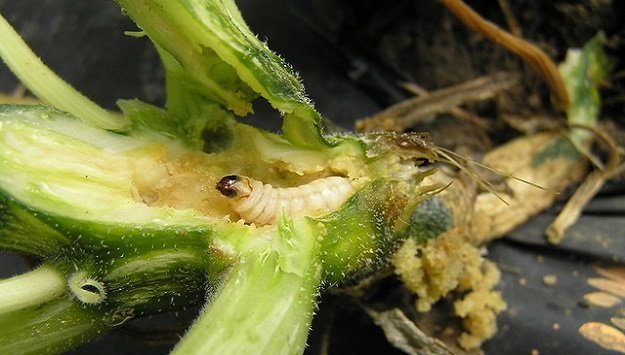 Don’t let squash vine borers get you down! Here are a few tips for preventing and controlling this destructive garden pest using organic methods…

Squash vine borers are dreadful garden pests that can destroy your entire squash crop if you happen to live in an area where this pest is prevalent. (It has happened to me more than once, although I was not even aware of this insect before moving to Ohio…)

The squash vine borer is common in the eastern United States and typically feeds on both summer squash and winter squash varieties, although some varieties are more resistant to this pest than others. The borers overwinter in the soil in large, brown cocoons, emerging as large black and orange moths in the spring, when they lay eggs near the base of squash stems. Once the eggs hatch, the larvae bore into the stems and feed for several weeks, causing wilting of the plant’s leaves, rotting stems around the base of the plants, and often, death.

Here’s a picture of my squash, dying from vine borers a couple of years ago, plus one of their cocoons that I found while digging in the garden last summer:

That said, there are a number of ways to control the squash vine borer and save your plants. However, the best method of control is always prevention. (Now that I am armed with this information, hopefully, next season’s squash crop will fare better than the last one!)

Below are a few tips for both prevention and control of this pesky garden menace:

If despite all your efforts at prevention, you still notice signs of this pest affecting your squash, here are a few organic control tips:

How to Get Rid of Squash Vine Borers