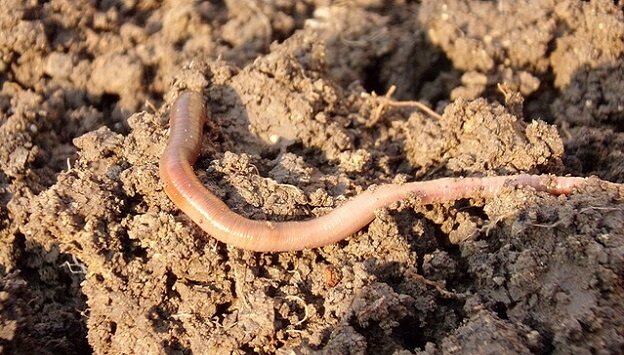 Happy Halloween! It’s a great day to talk about worms! But before you say “ewww!” keep in mind that these worms are one of your greatest garden allies. I’m talking, of course, about the humble earthworm…

You have probably heard that earthworms are a wonderful creature to have in your garden, but you may not know exactly why, or how they help you in your gardening venture.

Today we’re exploring the marvelous ways that this incredible little “creepy-crawly” is benefiting your garden in ways you may never suspect.

From aerating the soil, to creating rich compost, to helping nutrients reach your plants’ roots, the earthworm is a busy little wriggler!

Here’s how they work to benefit your garden, and what you can do to protect and encourage earthworms in your soil:

The pale red garden earthworm is often called “nature’s plow.” That’s because an earthworm pushes through soft earth with the point of its head. If the soil is hard, the worm eats its way through, forming interconnected burrows, some several feet deep. Burrows loosen the soil, admitting air and water and helping roots grow. A single acre of cultivated land may be home to as many as 500,000 earthworms, each making the soil a better place for plants.

Earthworms In Your Garden

When you add nitrogen-rich compost to your soil, you help worms thrive. However, adding synthetic nitrogen fertilizers may repel earthworms. Worms are very sensitive to physical and chemical changes and will flee the salty conditions that result from an application of chemical fertilizer.

As an earthworm feeds, organic matter passes through its body and is excreted as granular dark castings. You may see these small casting piles in your garden. An earthworm produces its weight in castings daily. Worm castings are a wonderful fertilizer, rich in nutrients otherwise unavailable to plants.

In cold weather, a soil search will turn up mature and young earthworms as well as eggs. By late spring, most worms are mature. As temperatures rise, activity slows; many lay eggs and then die. By midsummer, most worms are very young or protected by egg capsules. As the weather cools, young worms emerge. With wet weather, they grow active, making new burrows and eating extra food, resulting in more worm castings. Egg laying occurs again. Activity continues as long as soil stays damp.

Earthworms can survive in soil that freezes gradually, but sudden freezing can kill them. Protect earthworms against sudden freezes with mulch or a cover crop, both of which also provide worms with food.

To Read More + Learn How to Start a Worm Compost Bin, Visit RodalesOrganicLife.com…