The Pros & Cons of Hay Versus Straw Mulch 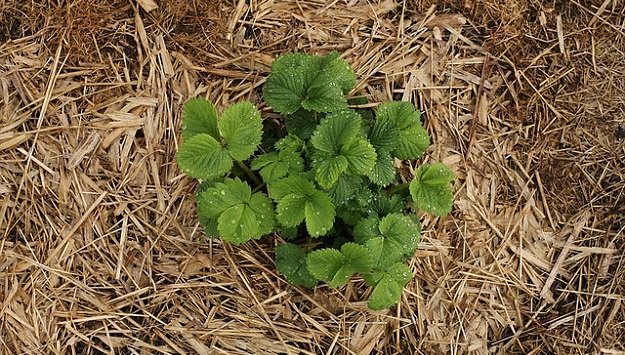 There are lots of reasons to mulch your garden: weed control, soil improvement, and reduced watering needs are just a few! And there are also many things you can use as mulch, from leaves, to bark or wood chips, to hay, grass clippings or straw. What material you use will likely come down to what is most easily (and cheaply) available in your area. In some areas, wood chips may be hard to come by. For others, you may not have much of a lawn to trim for clippings.

Two of the most widely used mulch materials are hay and straw mulch. These are often available fairly cheaply (although you will want to be careful of your source, as it is possible for these materials to be tainted with harmful herbicides that may damage your garden).

While they may look very similar, hay and straw are actually rather different, which gives them different properties as a mulch material. Straw, for example, is the byproduct of cereal grain production, and is composed of stalks from grains such as wheat, rye, or oats. Therefore, it may be available quite cheaply, depending upon where you live.

Hay, on the other hand, is grass that is cut and dried for animal feed. It smells sweeter than straw, and contains more nutrients as well as more potential weed seeds. It may also be more expensive, as it is often seen as more valuable than straw.

Both hay and straw can be useful forms of mulch, so if these are the two materials you have most readily available to you, here are some of the pros and cons to help you choose between the two:

The Pros of Using Straw Mulch

Straw is a terrific insulator. The hollow stems retain air and their chopped, light, fluffy texture allows for easy spreading. In fact, the principal uses for straw in the U.S. over the past 200 years have been as animal bedding, for insulating walls in homes (or building straw bale houses), and for covering the ice in ice houses to act as insulation so that the ice is available for use during the summer.

When used in a garden, it also tends to remain lighter and fluffier than hay, and it keeps a beautiful golden appearance for quite a long time.

The surface remains dry even as the lowest layers touching the soil begin to decompose. Have you ever picked strawberries in a field? Almost certainly there was straw around the bushes and it gave you a good clean place to sit or kneel that felt soft and cushioned.

The Cons of Using Straw Mulch

Straw can be expensive depending on where you live, and you might not be able to grow it yourself. Straw can also act as a home to rodents because of its fluffy texture. It has a higher tendency to blow away in strong winds when it is first laid, unless you try very hard to pack it down.

Straw does add some bulk to your soil, but it is mostly composed of cellulose and fiber that are left over after the plant puts all its nutrients into the seed heads that were harvested for grain. Consequently, straw adds fewer nutrients back into the soil when it decomposes, and soilborne bacteria tie up the available nitrogen for a longer time to break down the tougher stalks.

Because straw is fluffier and makes less direct contact with the soil, it takes longer to decompose . . . which is both a plus and a minus. If you want to add nutrients, this is a minus, but if maintaining a cover or walkway is important, then it’s a plus.

Blown-in weeds won’t land in a moist environment and sprout but, on the other hand, in-ground weeds are more easily able to push through a straw mulch from the bottom due to its fluffy nature. You can counteract this effect by weeding, putting down some newspaper before laying the straw mulch, and using a thicker layer—perhaps 8 inches thick or more—to provide a darker environment that most weeds simply don’t have the energy to get through.

The Pros of Using Hay Mulch

Hay is readily available and it’s possible to get a scythe and cut your own if you have a grassy area on your property. You don’t need to bale it—just cut it, let it dry, and then fork it into your wheelbarrow and wheel it over to where it’s needed. Even long grass clippings can function the same way as hay, because they’re essentially the same thing.

Hay left over from a previous year is often considered garbage by farmers who want to feed their animals the most recent and more nutritious hay. Consequently, hay is sometimes available for free during hay season in the summer.

You can find it by looking at your local online advertisement site, such as kijiji or craigslist, or by asking your farming friends.

Hay contains a variety of grasses and legumes, plus often clover and other flowers (including both the leaf and stalk), so the plant nutrients are all there.

When hay decomposes, it adds significant nutrients to the soil to increase its fertility. It adds a balanced ratio of NPK, as well as all the trace minerals that were contained in the plant.

Hay tends to lay flat and pack down, so it decomposes fairly quickly.

It also has more of a sponge effect than straw does, which means that in heavy rainfalls, it buffers or slows down the amount of rain that soaks into the soil to help prevent erosion and leeching of nutrients.

Because hay packs down densely, the weeds from underneath get smothered and die very quickly. But weed seeds that blow in can sometimes sprout, especially in an older hay mulch that is very damp.

The Cons of Using Hay Mulch

Hay mulch has a tendency to attract snails and slugs in rainier climates.

In moist parts of the world, hay mulch has more of a tendency to harbor slugs and snails, so you need to keep a good eye out for them and have a method of removal ready.

Hay generally doesn’t harbor mice, because it’s too dense. Hay takes on a packed and spongy texture that holds water, so sitting after wet weather is likely to leave you with a wet bum.

Hay holds moisture, allowing seeds on top to sprout, which is why some consider hay bale gardening to be such a great thing. But if you’re trying to suppress weeds, do you really want this? And often the hay itself contains seeds that will sprout once they get wet, so you could end up with a living pathway until the dry weather dries out the topmost layers of your mulch again.

Which Should You Choose?

In a perfect world, the solution is to use both—a thick layer of hay mulch on the bottom, where it will decompose and act as a spongy reservoir for moisture, topped off with a few inches of straw that will be a dry layer, preventing blown-in weeds from sprouting and giving you a lovely, dry, golden walkway.

What If You Can Only Use One?

But we don’t all live in a perfect world, do we? We’re just trying to make the best of what we’ve got, and that’s what makes a great gardener or homesteader—the ability to problem-solve. So, I’d suggest that if you have a choice of only one type of mulch, you use hay simply for the fertility it will add to your soil.

As all practical gardeners know, you use what you have or can easily get. Why pay money for straw if a local farmer will give you hay in July for nothing? If you can get it free, but you don’t need it all at once, then simply put the extra bales out by your garden, throw a tarp over them, and save them for next year.

If the hay gets wet and starts to compost itself, it really doesn’t matter. It’s all going in the soil in the end anyway, and the pile of bales can act as a windbreak while it waits to be used.