The Secret to Growing Great Mushrooms 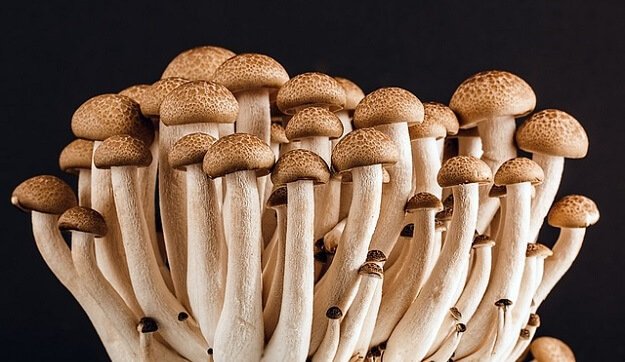 Too cold to garden outdoors right now? Try your hand at growing mushrooms! They’re easier than you think…

Mushrooms are an interesting item to grow. Technically a fungi – not a vegetable – mushrooms require some special growing considerations, but you can take the same pride in a great mushroom harvest as you would in a good veggie crop! There are many varieties of tasty mushrooms you can try growing, and with the hefty price you’ll for specialty mushrooms at the store, growing your own can be a good option.

If you’ve ever wanted to try growing mushrooms, winter can be a good time to give it a shot. Mushrooms prefer to grow in the dark, and they don’t like it too hot. If you have a basement, this is often a great place to grow mushrooms, as it tends to be dark, damp, and warm – but not too warm – in the winter.

are available that make it easy to start out for the newbie mushroom-grower, but if you’re a bit more experienced, you can also do it on your own.

Here are a few tips for successfully growing mushrooms:

Two of the best reasons to garden are to grow things you would otherwise have to pay too dearly for at the supermarket and to grow great-tasting things you cannot buy at any price. Mushrooms often fill both bills.

Home gardeners in China have been growing mushrooms for more than 1,000 years, and it’s finally catching on among North Americans. Instead of being associated with witches or psychedelic drugs, mushroom gardening has moved into the culinary realm on this side of the world. And growing your own is about producing a truly superior fresh food — and not having to rely on the luck of the hunt.

The surest (and most entertaining) way to grow mushrooms at home is with a mushroom kit, which makes a great winter tabletop project. Depending on the kit, you can grow several types of gourmet mushrooms in a matter of weeks, including oysters (Pleurotus species) and shiitake (Lentinula edodes), as well as various button mushrooms (Agaricus bisporus). Then you can take what you learned from the kit to move on to more sustainable outdoor projects, such as growing oysters in boxes or shiitake on logs. You can even introduce the delectable wine caps (Stropharia rugoso-annulata) to old compost heaps or a shady area of your garden, where they’re apt to naturalize on their own. Start with these easy species and soon you may find yourself dreaming of — and growing — cinnamon caps, lion’s manes or black poplar mushrooms, too.

“It’s fun to cultivate your own mushrooms,” says mushroom expert Thomas Volk, a professor of biology at the University of Wisconsin-La Crosse. He describes growing mushrooms as more art than science, which involves “a lot of watching, adjusting, figuring out what works.” Although mushrooms tend to be slow to “fruit” compared to vegetables, once established in a suitable site, they often stick around a long time, fruiting in flushes for years.

Here’s the best part: You can start with a mushroom kit now, fruit it indoors and use the remains to start a more permanent outdoor colony. Paul Stamets, founder of Fungi Perfecti of Olympia, Wash., and author of six books on mushroom culture, says that’s so because “mushroom mycelium is hungry. It wants to run.” Like a sourdough bread culture, a good strain of mushroom will keep going and going when given the right growing conditions.

The reward for your efforts will be some of the freshest, tastiest mushrooms you’ll ever eat. Don Simoni of Mushroom Adventures, a San Francisco kit company, says, “A lot of the mushrooms at the market are three to five days old before you buy them, but they’re really good for only two days and then there’s a flavor change.”

You also need patience to grow mushrooms because they fruit only when they are good and ready. Stamets says, “It is my belief that fungi take a very long-term view of their habitat, and they are community-based,” which means fruiting is intended to serve both the fungus and the ecological system it calls home. Edible mushrooms are a minor byproduct of this process.

The easiest culinary mushrooms to grow at home are oysters, shiitake, wine caps and portobellos, but many more possibilities exist. Here’s a closer look at the four named above: