Tips & Tricks for Growing Arugula – A Nutritional Powerhouse from Your Garden 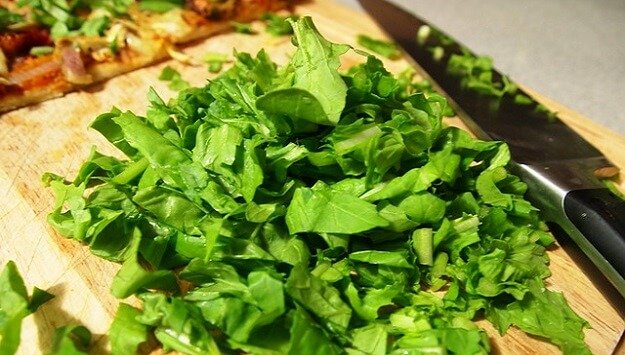 Arugula is an incredibly tasty and nutritious salad green – and it’s also really easy to grow! Here are a few tips for growing arugula – and why you should…

Arugula (also commonly known as “rocket”) is one of my favorite salad greens. (It must be an adult thing, because I hated it as a kid, and my mom loved it!) Not only is arugula delicious both raw in salads or pesto, or cooked like spinach, but in general it is very easy to grow.  In fact, I just planted a row of seeds last weekend – the first thing planted in this year’s spring garden!

This green likes cool weather, so if you are growing arugula in the spring, starting early is a must. I generally tend to have better luck with mine in the fall, but I still try to plant a row or two for spring salads, though it tends to bolt quickly if it gets hot too early in the season.

Arugula is not only tasty and easy to grow, but it’s also really good for you!

According to The Grow Network,

Arugula is high in fiber and water content, both of which contribute to your satisfaction level when eating it.

Like mustard greens.., arugula is high in calcium and in vitamins A and K. In addition, arugula has lots of glucosinolates, which may help protect against cancer.2)

Like spinach, arugula also has high levels of iron. Calorie for calorie, arugula has more iron than beef … by a long shot. Just 25 calories of arugula will get you 8% of your daily iron intake. Meanwhile, you’d need to eat about 160 calories of grass-fed ground beef to get that same quantity of iron.3)

Just in case you are not totally convinced: In terms of calories consumed, arugula also contains high levels of folate, B vitamins, and trace minerals like magnesium, manganese, potassium, and chlorophyll (which is believed to be a good blood cleanser).

Arugula is aptly called “rocket” as it can take off like a rocket in the garden. Vigorous, abundant growth is typical, so if you’re planting from seed, be careful not to sow too heavily, or you may end up with an arugula forest – which I have a few times before.

Here are a few tips for growing this delicious and nutritious green:

It is best to direct-seed arugula right into the garden outdoors, which you can do by either scattering seed lightly and then covering with a light layer of soil or compost, or by planting in shallow rows. It will germinate best in soil temperatures of 40-55 degrees Fahrenheit, and it can take anywhere from 4-10 days depending on the temperature. Keep soil moist until several leaves appear. Arugula has fairly shallow roots, so it will need regular watering unless it rains often. Keeping them mulched and watered will help keep your arugula from bolting during large temperature swings.

You can harvest arugula in just 30-40 days from planting, so it is one of the fastest growing greens. Because it is such a quick-growing crop, you may wish to utilize succession planting and plant a new batch every 2-3 weeks to keep a good supply coming.

A few more things to keep in mind when growing arugula:

Even though most of us think of arugula as a lettuce, for the purposes of crop rotation, it’s actually a cole crop like cabbage. Avoid planting it after other brassicas like cabbage, broccoli, cauliflower, kale, etc.

Since we grow most of our food at home, arugula gets bonus points for its eagerness to spread itself around my yard. If it shows up somewhere that I don’t want it to grow, I just dig it up and move it somewhere else. But if you are one of those meticulous gardeners who hates to deal with unwanted plant volunteers, then make sure you do not let this plant flower (even though the flowers are great for pollinators, as well as being edible and delicious).

Unlike many of the other cole crops—such as cabbage, which can keep for weeks, months, or even years (as sauerkraut)—arugula is best consumed fresh or, if kept in the fridge, within a couple of days after being harvested.

As the weather warms, my arugula leaves often have tiny little holes in them that evidence the fact that I am not alone in my love for this stuff. Flea beetles seem to munch on it almost as much as I do. Since the minuscule portions those pests eat seem to have no effect on the production of the plants, and since I’m an organic gardener, I just resign myself to share. But if it bothers you, you can use whatever organic pest-control method you use on your other cole crops to discourage flea beetles.

Read more about growing (and eating) arugula at TheGrowNetwork.com…