[Video] A Quick Look At Our Hay Bale Garden 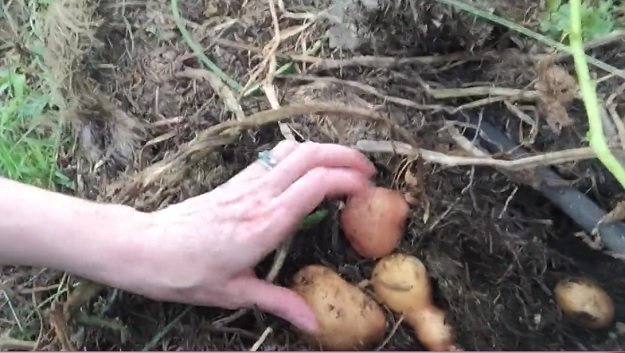 What do we grow in our hay bale garden? Tomatoes, potatoes, and more! Take a look at this year’s results in the quick video below…

Today we’re sharing a little video from our own garden. For those of you who have asked questions about our hay bale garden, I thought you’d like to catch a glimpse of what our late summer hay bales are up to!

Check it out below to learn what we’re growing in hay bales this year, where we get our hay, and how we harvest our hay-bale-grown potatoes. (The harvest was small this year due to the dry start to the summer, but we did get some nice looking potatoes to enjoy this winter.)

We use hay bales on each end of our garden, mostly because we have easy access to hay, but also because it is less work, and some crops do really well in them. They are a great alternative to growing in regular soil when it is very wet, as they drain well, so crops aren’t standing in water when it floods (which is a regular occurrence over the past couple of summers).

A hay bale garden would also work well if you have very limited space to garden, as you could even grow crops on top of a concrete patio – no soil required!

Here’s a quick look at our hay bale garden for this year. I have also included more info below the video, for those who are curious as to our process and how we plant and manage our bales.

Here’s our general process for our hay bale garden:

September to November: Place hay bales where we want them for the following year. The exact timing doesn’t matter. If we get them before the garden space is ready for them, we store them in the garage to keep them dry until we have time to put them out. We usually lay a layer of cardboard down first, to prevent weeds from growing up between the bales. (Note: It will be VERY hard – if not impossible – to move them once they get wet, so they should be placed exactly where you want them in the first place.)

Late March through April: Spread a layer of compost over the bales to be planted in the next few weeks. I usually put down compost at least 2 weeks before the bales are to be planted. But if you spread it too early, you will encourage weed growth, and some of the compost may get washed away by rain before your plants get to benefit from it. 2-4 weeks prior to plantings is a good time frame. We also spread quite a bit of coffee grounds on the bales where we will be planting potatoes, though I have recently heard this actually probably won’t help make them more acidic…

Early April through May: Plant the bales! We usually put potatoes in in early April. To plant, you can make holes in the top of the bales with a trowel, or (my usual method), just shove the potatoes down into the bales several inches by hand, then pull the hay closed over them.

Other things we regularly plant in hay bales are tomatoes (determinate varieties work best as they can be supported by staked tomato cages), tomatillos, squash, and peppers. Eggplants and peas do not do well in my experience. Lettuce and salad greens can do okay in the spring, but only if it is a wet year, and it can be tough to get them to germinate.

To plant seedlings, form holes in the tops of the bales (either by hand or with a trowel), gently place the seedlings in and pull the hay closed around the soil plug. Water well. Due to the increased warmth of the bales, typically seedlings will take off and grow much more quickly in the bales than in the ground at first.

During the Summer: Water the hay bale garden well and frequently during dry weather. Drip irrigation works very well, as it will absorb slowly into the hay, rather than simply running right through as it will if it is dry and you dump a bunch of water on them. Mulch the tops of the bales if possible to keep moisture in and keep weeds down. We use grass clippings for this. (Generally, I’ve found weeds aren’t too much of a problem after the first month or so, so just stay on top of it at first and they should subside.)

Maintenance & Harvesting: Weed as needed, and you may wish to water with a liquid organic fertilizer or compost tea during the summer for fruiting plants. Tomatoes and peppers should be caged and staked if possible. The higher profile of the bales makes it more likely that they will blow over if there is a windy day or a heavy rainstorm, so they need sturdy supports. I put wire cages around each tomato and pepper plant, and drive at least one stake through the cage (two for tomato plants), and down into the ground. Do this while the plants are small to avoid root damage (I learned this the hard way the first year!).

Most crops can be harvested as usual. For potatoes, we harvest new potatoes early in the summer by reaching into the bales and feeling around gently under the plants to find sizeable potatoes. Don’t take more than one or two per plant. For storage potatoes, wait until the tops die down, then cut or pull off the twine, and pull the bales apart to find the potatoes. Keep in mind that some may be deep down in the bale, so search thoroughly through each bale. It will be a cleaner and easier harvest if you can do it when the bales are slightly dry.

Fall Cleanup: After the crops are harvested and plants have died down, remove plant remains, stakes, and cages from the bales. Cut or pull off any remaining twine. At this point, the bales are moderately to significantly broken down. I use a hay fork to scoop up the remains and add them to the compost pile or use them for mulching garden beds for the winter. They keep weeds down and last longer than grass clippings, so they make great mulch, and the earthworms love them!