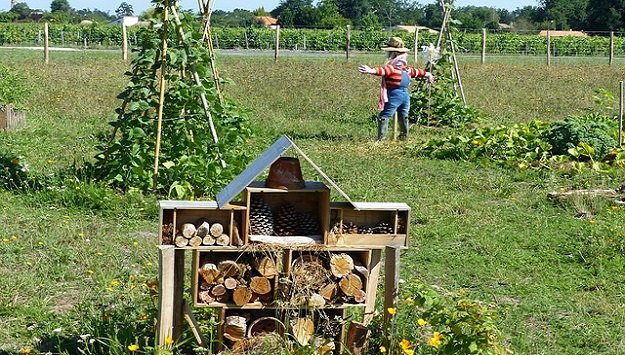 We humans live in a world of disposablity and convenience. When we finish with something, we throw it away, whether it be a partially eaten piece of food, a dish or utensil, or a bag to carry things in. We raise animals separately from our food crops, and instead of making use of their waste, we use cheap fossil fuel byproducts to fertilize our crops, even though they deplete the soil and run off the land into our waterways, causing pollution problems. We are quickly using up our resources without really even thinking about it, and someday, our species will pay the price.

Permaculture is a different way of looking at the world and its resources – particularly when it comes to growing the food that we eat.

But what exactly is permaculture?

As you may have guessed, the origin of the word “permaculture” is a contraction of the words permanent culture – the idea being that we should rely more on sustainable agriculture that is not dependant on fossil fuels but may be sustained indefinitely – or permanently.

We should use local resources, smaller more diverse crop planning, and non-chemically-dependant fertilizers, for example. Permaculture is a movement away from large, industrial-scale agriculture to smaller and more sustainable farms, encouraging more interdependence with community members.

The origin of the term permaculture began in the 1970’s with a wildlife biologist and ecologist named Bill Mollison from Australia. He saw the growing monster of the Industrial Revolution and its impact on our culture and realized that this form of consumerist culture was bound to eventually cave in due to its monstrous appetite.

Mollison took a positive approach to this problem and began studying nature and gaining an understanding of the sustainable cycles that have sustained life in the natural world for thousands of years. He then began to live by and teach this philosophy to others.

Another man who has quietly built a following in this movement is Masanobu Fukuoka. A major contributor to the “no-dig” method of gardening, Fukuoka believes that you should disturb the soil to an absolute minimum. Instead, he believes seeds should be planted right on the soil’s surface and then lightly covered with straw or other light mulch, just as they would be in nature.

Weeds are trimmed before the flowering stage and allowed to become part of the mulch. This kills unwanted vegetation without using toxic chemicals and creates a favorable soil in which to plant. In time, the soil becomes healthier and weeds and pests become less of a concern.

Ruth Stout is another voice in this community. Her ideas about “no-till” gardening have caused many to change their views about weeds and weeding. Similar to Fukuoka, she purported to never need to weed but allowed plants to grow together under the belief that all vegetation, both “good” and “bad,” builds the soil – which leads to healthy crops which means fewer pests. Once the soil is built, weeding becomes as simple as easily picking out the occasional weed – all without chemicals and pesticides.

From its quiet, revolutionary beginnings through to it’s growing popularity today, it is apparent that permaculture is here to stay. Increasing pollution due to industrial waste and mass transportation systems is clearly unsustainable. Shipping food from one side of the country (or the globe) can only be done for so long until it becomes cost-prohibitive as fuel costs continue to rise. It makes so much more sense for the planet and for our communities to buy locally grown food – or to grow it yourself.

Permaculture as a basic philosophy has grown substantially over the past several decades and spread its less intrusive approach to living on and using the earth. More and more farmers, homesteaders, and gardeners of all kinds are choosing to use natural, sustainable permaculture methods when growing food – and the world is becoming a better place for it!